An Aussie, An Englishman & Anirishman 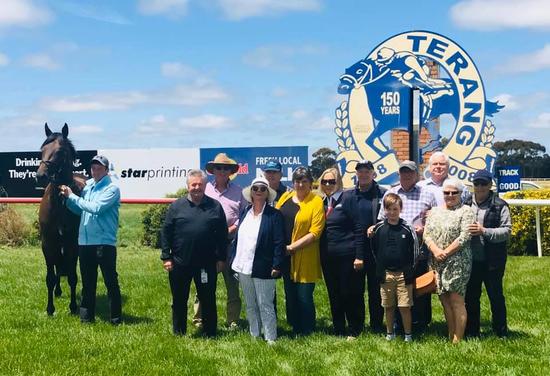 An Aussie, An Englishman and Anirishman have played out the trifecta in many good yarns over the years.

The Irishman generally wore the blunt end of the joke, but it wasn't the case at the Terang racecourse yesterday.

On debut in the Greg Allan Farm Machinery Plate over 1400m, 3YO Anirishman had the last laugh on his opposition thanks to the talented training combination of Ciaron Maher and David Eustace, aka the Aussie and the Englishman.

The trio worked together beautifully to record a popular victory with the help of talented rider Jarrod Lorensini.

Many of his big group of owners were on course and obviously delighted with the result.

Some solid trial form was not missed by punters, the colt starting a $3.60 favourite after opening up as short as $2.60 in first markets.

Ridden like the best horse in the race, Lorensini sat outside the leader, before slipping away early down the spacious home straight.

Maintaining strength and rhythm he won by just over one length, despite switching off close to the winning post.

It was a terrific training performance by the stable to win on debut over 1400m.

Patiently working him through a series of trials, his fitness built as did his education.

A graduate of the Inglis Great Southern Weanling Sale, the son of Riverbank Farm sire Anacheeva was bred by Victoria's Chatswood Stud.

Some of this ownership group have had previous success with the female side of his family, notably through Platelet and Peruggia, and look set for some more fun.

With plenty of three year old options coming up, good times look set to continue for all involved.

This Irishman may just well be the yarn, and not the brunt of it!

If you would like to get involved in racehorse syndication and race a share in a horse with Australian Thoroughbred Bloodstock please contact Peter by email, peter@atbloodstock.com.au or you can ring on 0428 378 049.

Check our racehorse sales page by clicking on the link below.