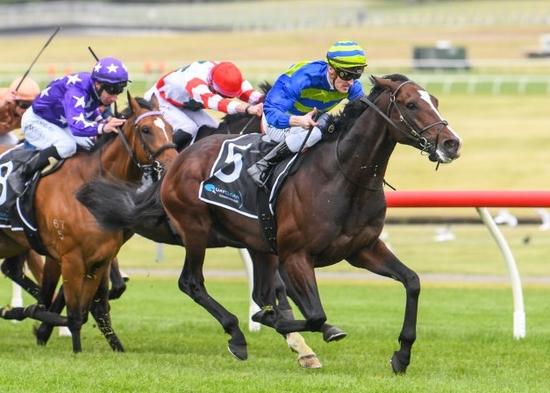 Southern France produced the quickest final 200m of the meeting when powering to a stylish win in the $300,000 Group 2 Quayclean Zipping Classic over 2000m at Sandown yesterday.

After a disappointing result (19th) in the Lexus Melbourne Cup, eleven days earlier, the 4yo son of Galileo showed the form that seen him split high quality staying gallopers Kew Gardens and Cross Counter when finishing third in the Irish St Leger back in September.

The start before he defeated Downdraft (2019 Hotham winner) and Master Of Reality (4th Melbourne Cup) in the St Leger Trial, showing his overseas form was in stark contrast to his Cup effort.

A muddling pace and being caught wide in the Cup were the only excuses trainers, Ciaron Maher and David Eustace could offer for the poor run.

Southern France pulled up really well after the Cup and when nominations were extended for the Classic, only an average midweek gallop would prevent him from running.

After galloping with Humidor, Maher was happy to accept for the race and the rest is history.

With a stronger race tempo, albeit settling back a little further than planned, the long-striding stallion was able to reel off brilliant final sectionals to be far too strong for his opposition.

Despite Mark Zahra having to change whip hands on a couple of occasions, he responded strongly to surge away when defeating Miss Siska and Chapada by almost two lengths.

The win has now opened up the door to a few options which may include a trip to Dubai and Royal Ascot.

Alternatively a freshen-up could see him tackle the Group One Autumn double of the Australian Cup (2000m) at Flemington followed by the Tancred (2400m) in Sydney.

Maher and Eustace will remain as trainers if takes the Australian path, while it is yet to be decided if they would steer the ship if travels around the world.

Any plans will be aimed around another tilt at the Melbourne Cup in 2020.

For all of his owners, the pre-Cup anticipation and excitement that disappeared for a bit over a week, returned as quickly as his final 200 metres yesterday.