Cumani 'Deals' up Number One 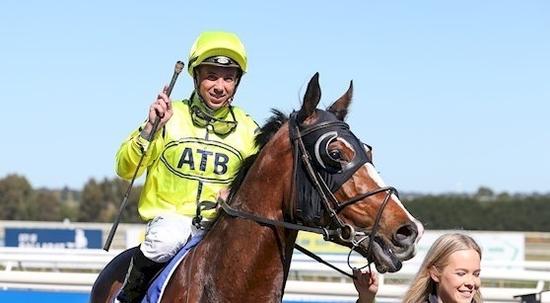 While not totally convinced it was the secret, the addition of blinkers to Sirius Deal seemingly played a part in Matt Cumani's first winner in ATB colours.

Yesterday's success at Sportsbet Ballarat on the new synthetic track over 2100m, also removed the Maiden tag from the 4YO homebred son of Dundeel.

Bad barriers, bad manners, bad rides and bad luck had all combined for no winning results from his first ten starts - eight of them this preparation which commenced with a first-up run back in February.

A couple of placed efforts recently gave hope that a win was not far away, but everyone's patience was starting to wear thin.

Juggling distances and working out whether he liked wet tracks as opposed to dry or the synthetics were part of the conundrum that faced Matt.

Generally his best runs had been on the synthetic surfaces and with the addition of blinkers thanks to Jordan Childs, Ballarat became the preferred option over what will be a much stronger race at Bendigo on turf next Wednesday.

Add in the smaller field and good barrier and it looked more suitable.

While Matt was skeptical to the advantage gained with the blinkers, the gelding did seem to race with more purpose right from the moment the barriers opened.

Post race, the Ballarat based trainer suggested that a confident and measured approach by Dean Holland was more the reason for winning, and on reflection it is hard to argue with those comments - it was a brilliant tactical ride!

After bounding to the lead early, Dean handed-up to race favourite Rebel Excell who circled the field after being caught wide.

Another mid race move from The Undercover again lit up the front markers, but Dean who had already slipped off the fence, was not giving up his advantage outside the leader.

With both of his immediate challengers already under pressure, he timed his winning move to perfection.

Post race Dean commented that he felt like he the winner from as far out as the 600m mark, not long after this point he released the handbrake and sprinted for home.

Full of running on the home turn it was clear that he was going to take some beating.

Eventually scoring by 1.75 lengths, the win was made sweeter with the Super Vobis bonus that went with the first prize of $12,650.

A combined payday of $21,050 was a nice way to end what is now thankfully a winning preparation.

Sirius Deal will head to Manningtree Park for a short break before coming back to race during the summer months.

A handy producer, yesterday's success made it two recent wins after Sirius Suspect (x Wanted) won at Flemington in July.

Hopefully with some natural maturity and a little break he can come back and be competitive at the next level of benchmark racing.

Matt Cumani - learn about our trainer by clicking here

If you would like to get involved in breeding with ATB, or buying a racehorse share and enjoying the experience of racing please give Peter a call on 0428 378049 or email peter@atbloodstock.com.au