GRIFFO STEPS UP TO THE PLATE 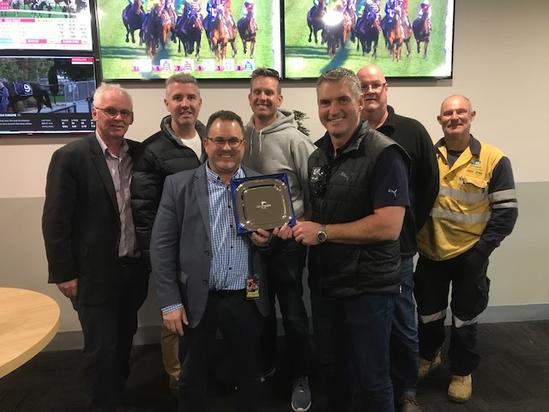 Australian Thoroughbred Bloodstock and Darren Weir were racing partners for many years, and a successful combination at that. Both organisations grew together to the point that both were leaders in their fields.

Unfortunately for Weir he was disqualified from training for four years in early February.

It left ATB with more than 30 horses to relocate to new trainers, something just completed after three months.

Weir was a trainer we could trust to get the job done.

But with that removed from our business model some concerns going forward were real. It wasn't just his ability to consistently produce results, but we never found it difficult to sell our stock that were to be trained by DK Weir.

Proof of that with the fact we had already sold all shares in eight of our yearlings that were Weir bound. Sold before the Xmas party last year in fact.

Weir left us with his current season statistics reading 93 starters for 12 winners (12.9%) and 40 Top 3 finishes (43%). Those figures were slightly down on previous seasons, but were still good considering a few 'list cloggers' have since been retired.

As a matter of interest, only three ex-Weir runners have won with their new trainers at a strike rate of 9.4%, Top3 finishes only 28.1%. Yogi was one of those only three days after he was disqualified. It has only been a small sample of 32 runners, so best judged when all horses have had full campaigns in their new stables.

We are confident the new trainers enlisted will get the job done, some current ATB trainers, others new and exciting trainers on the way up.

One trainer that has happily built up an impressive record over the past two seasons is Robbie Griffiths.

A relatively new addition to the ATB training portfolio, 'Griffo' is having a stellar 2018/19 season after he built into 2017/18 season with some very good numbers.

Apart from training the likes of Mai Shiny Choice, Chateau Griffo and Magical Milly through the 2016/17 season, it has been since then that his impressive figures have continued to grow.

This season those numbers have gone to a whole new level.

Many of the youngsters that were being groomed through 2018, have hit the track and the majority are performing well.

From 74 runners up until today, the stable have produced 16 winners at the great strike rate of 20.2%, top 3 finishes carving out the great figures of almost 60% from 44 placings.

In anyone's language they are top notch figures from what is a healthy sample of runners.

The growth from season to season is there for all to see, so hopefully now with most of his ATB team of thirteen horses into their careers we can see more results as individuals and a collective.

Mr Money Bags (photographed with owners), Collectable, Angel Lass and Fact Or Fable have led the way, but others including Whitemore, Dentara, Igniter, Oceanity and Lord Lennox are showing great ability with more to come.

The current challenge for Robbie and his team is to get his namesake 'Tycoon Griffo' to join that list of winners.

An unsavoury first day at the races last Sunday at Echuca seen the mare return home with a black eye courtesy of a clod of turf. It certainly seemed to effect her ability to want to race, so it was a total forgive run.

The magic of 'Griffo' is now needed to restore some confidence in the Written Tycoon mare, so she can help grow the impressive set of numbers he has built in 2018/19.

Well done to Robbie and his team!