Bags of Money for All Star Mile 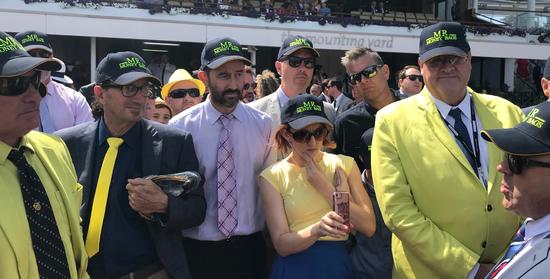 Mr Money Bags is aptly named for the up-coming $5 million race, The All-Star Mile, and has a local connection in Moorabool.
Trained at Cranbourne by Robbie Griffiths, Mr Money Bags is part-owned by Darren and Liz Dance (Australian Thoroughbred Bloodstock), just outside Ballan, and the 4-year old is a feature winner over the Flemington mile.
“He is a good Flemington horse who can run 1600m – he has won five races with five placings from 20 starts so far,” Dance said.
“We chose him as he had the right profile for the race and would be popular amongst voters with a catchy name like Mr Money Bags.”
Dance said the connections are from all over Australia and even before the race is run, have already won.
“Yes, now the horse is in the top-ten they are guaranteed $90,000, more obviously if he is first past the post.”
The All-Star Mile (1600m) was designed in 2018 for middle distance thoroughbred horses and is a special conditions race. Run in Melbourne’s Autumn Racing Carnival, it has a feature prize pool of $5 million. The race takes its inspiration from Japan’s famous public- selected race, the Arima Kinen.
And how is the 14-horse field decided for Flemington on Saturday 16 March?
It came back to a populous vote, with 130 horses originally in contention and only last week the top ten were officially announced after voting closed. Mr Money Bags scraped in at number 10 with 5013 votes, after The Autumn Sun did not accept.
The other four horses to take the field were ‘wild cards’ and include Hartnell, Hawkshot, Mystic Journey and Happy Clapper.
And how does Darren Dance think Mr Money Bags will go against Happy Clapper, who has run second to the famous mare Winx five times?
“It just comes back to the barrier draw and luck on the day,” he said.
Mr Money Bags is a 4-yo gelding and was purchased for just $25,000 from the Adelaide Magic Millions in 2015.