SOCIAL TAKING OWNERS ON A SPIN 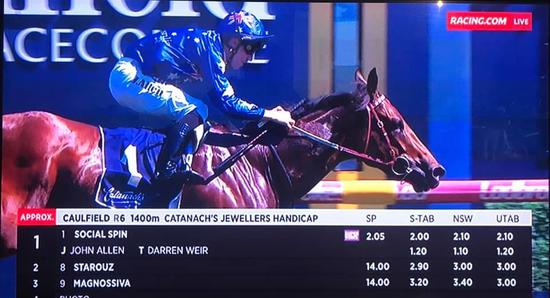 The Darren Weir trained Social Spin did his Australian Guineas chances no harm after a convincing win in today's Catanach's Jewellers BM78 Handicap over 1400m at Caulfield.

Burdened with 60kgs, he treated his rivals that carried between five to ten kilograms less than him with contempt.

John Allen rolled forward after being tardy away and despite racing wide for the entire trip was far too strong winning by one and half lengths.

He is entered for the Australian Guineas on March 2nd and as Weir suggested post race, "we may follow our dreams."

A record of four wins from nine career starts now has his earnings beyond $320,000.

A homebred, the son of Toorak Toff is a half brother to ATB's dual Group winning mare La Passe being out of Pirouettes.

It was a memorable day for Darren & Liz Dance's syndicating business with Crack The Code trained by Mick Price the first leg of a winning double.

Both horses wore the Australia Day silks to commemorate the National day in style.