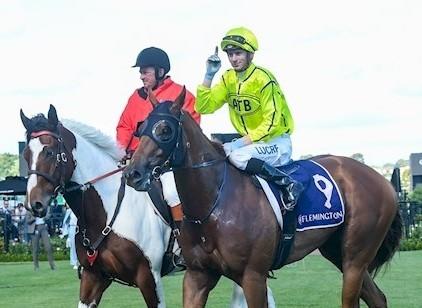 The upcoming All-Star Mile is going to be a big payday for some lucky connections.

Mr Money Bags is the perfect name for a horse trying to make the field in the rich $5m All-Star Mile to be run at Flemington on March 16th.

Racing Victoria's newest race has created plenty of interest, especially the concept, where the public decide ten of the fourteen runners through a popularity vote.

Four wildcards will make up the final field.

The Robbie Griffiths trained gelding has been a fantastic money-spinner for Australian Thoroughbred Bloodstock connections, and more importantly the fact that three of his five wins have been at headquarters - one over 1600m when he won the Silver Bowl Final in July last year - makes him a more than worthy nomination for the race.

Those three wins were with Jye McNeil in the saddle - he knows him very well and will take the ride should 'The Bagger' make the field.

Keeping to the theme of money, our son of Written Tycoon was a $25,000 Magic Millions buy from Adelaide in 2016.

Having Written Tycoon as part of your make-up is certainly no negative either.

We have plenty of positives on our side, but now we need plenty of votes to make the field.

ATB boss, Darren Dance loves the concept and is excited with what may lie ahead for connections.

"The race is a fantastic initiative and one that has people talking about racing in the best light.

Having an entry is very exciting for the connections and whether we make the field or not, it is going to be an exciting month to be part of and a great one for racing in this state."

Please consider Mr Money Bags when casting your vote and try to encourage family and friends to do likewise if you want to see him contest the race!

Vote through the link below:

The photo above says it all "VOTE ONE - MR MONEY BAGS!"