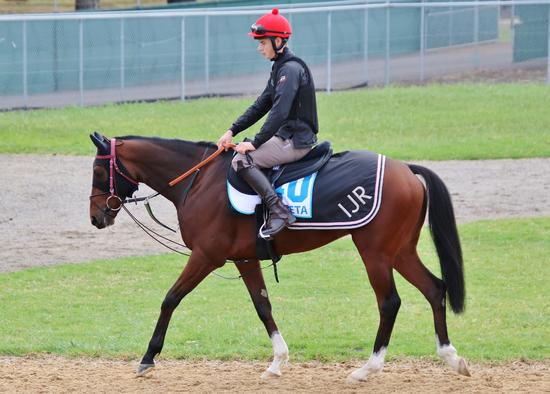 Destination Melbourne Cup was finally rubber-stamped at approximately 4pm on Derby Day for Scottish trained gallop Nakeeta - a horse in which ATB and loyal clients share half the ownership.

Making the final field ended what has been one long and winding journey to this year's Cup!

This journey began when  Darren Dance negotiated a deal for 50% in the galloper after his slashing 5th in last year's Cup.

A summer European campaign beginning at Chester in May never gained any real momentum, especially after he was poleaxed in the Ebor Handicap - a race he won in 2017 - and then unplaced at Doncaster three weeks later.

Any chance of returning for the 2018 Cup looked forlorn.

After the dust of disappointment settled, further discussions between major owners, Darren Dance and Alex Card in conjunction with trainer Iain Jardine re-floated hopes of a trip down under.

The problem now was getting on the last shipment to Australia; we were twelfth in line and only eight could make the final flight out.

As fate had it, we managed to gain the last spot when trainer Willie Mullins pulled out his three gallopers and Aidan O'Brien withdrew one of his three.

Nakeeta arrived in great order and settled in very nicely at the Vintage Crop barn of the Werribee Quarantine Centre.

The next task was to rise up the order of entry for the Melbourne Cup - on arrival we were in the low 50's.

Our main hope revolved around a good result in the Moonee Valley Cup - gaining some points would lift us to somewhere in the high 20's or low 30's.

Prior to the Moonee Valley Cup some natural attrition through injury and poor form had Nakeeta up to 36 in the ballot.

All of a sudden any placing at the Valley looked certain to elevate us into the Melbourne Cup field.

With the booking of Internationally acclaimed and Melbourne Cup winning rider, Brett Prebble the excitement was building again - as were everyone's hopes.

The Moonee Valley Cup turned out to be a disaster, the horse did not handle the tight track and appeared to resent the real firm surface.

Back to the drawing board, the only good thing was that Nakeeta came through the race unscathed.

We also lost a jockey, with Prebble moving on in the hope of picking up another Cup ride.

All we could do now was wait and hope that a dozen or so horses dropped out of contention for whatever reasons.

The Geelong Cup came and went with some more shuffling in the order, but nothing major for us as we floated around the low 30's.

The next declarations and the lead-up to Derby Day did result in more attrition - now things were getting serious, we were on the cusp of a Cup start, but everything needed to go our way with us sitting 24th in the order of entry.

Plenty of things could happen, even our other Cup hopeful Yogi could knock us out by winning the Hotham on Derby Day.

Yogi didn't win, but A Prince Of Arran did, meaning we were back to 25th in order and likely to miss out.

Twitter alerted us of a doubt on Red Verdon and by 3.30pm he was out of the Cup and we were back in.

Only one race and horse stood between us and a Cup start - the Derby and Thinkin' Big.

He wins and we were out again - but this time it would be for good!

Plenty of nervous owners even backed the Derby favourite hoping to curse it's luck with their own lack of punting luck!

Thankfully the racing Gods did shine down brightly on us - the Derby favourite finished down the track meaning we held the final spot in the 2018 Melbourne Cup field.

To complete the excitement of the day, part-owner David Wagner drew barrier three - after all the highs and lows we deserved that good alley.

The journey is almost complete - only two miles to go - the most prestigious two miles in Australian racing history.

And again we get to share the experience with a great group of owners!

We might be a 100/1 shot, but along the journey we were much bigger odds to even get to Australia let alone into the race.

With young gun jockey Regan Bayliss joining us for the last leg of this ride, we look forward to 3pm on Tuesday.