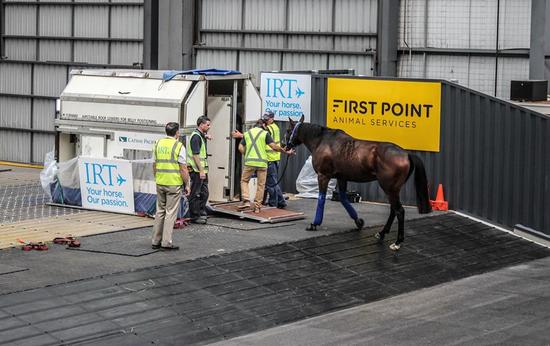 After a brave seventh in this year's Melbourne Cup, French galloper Tiberian left Melbourne yesterday on his way to Hong Kong to run in the International Vase over 2400m on December 10th.

One of three runners invited from the Cup, his travelling companion for the flight was third placed, Max Dynamite.

The other invitee was the Cup winner Rekindling, but connections declined the offer to run.

Tiberian along with Max Dynamite were the final two horses to leave the Werribee quarantine centre after another busy Spring carnival.

Olivier Peslier who retains the ride, has won the Vase four times - more than any other jockey.

With a final field of fourteen expected, Tiberian is $21 in betting with Ladbrokes.

Highland Reel holds favouritism at $3.50, with Kiseki not far behind at $4.

Interestingly, Talismanic is only $6 in the market after his Breeders Cup win in Del Mar - Tiberian defeated him twice in the lead-up to this year's Melbourne Cup.

With many of his Australian owners making the trip to Hong Kong, it makes for another exciting journey for ATB owners in an International horse.

If you would like to get involved in our next Melbourne Cup runner click here for more information.