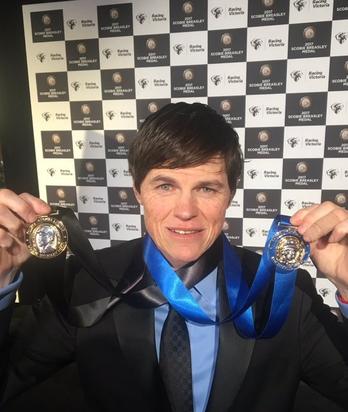 To be the best, you need to associate with the best!

It is a very basic principle, but it has stood the test of time and one Darren & Liz Dance's syndication business Australian Thoroughbred Bloodstock does well as it continues to build its brand.

Last night it was Award's night for Racing Industry participants, featuring the Scobie Breasley Medal, the Brownlow Medal for jockeys.

Craig Williams was crowned the winner for the fifth time.

Williams is a regular metropolitan rider for ATB with recent wins on Wanted Diva, Yogi (twice), Peruggia helping him secure the Roy Higgins medal for the most wins on city tracks in 2016/17.

Dean Yendall rode the most winners in Victoria, and by association 18 of ATB's 49 winners for the season.

Darren Weir clearly trained the most winners in the state and at metro level and did similarly for ATB.

In recent times we have noticed Archie Alexander as a trainer with a great future and have sent horses to him accordingly.

To see him win the Colin Alderson Rising Star Award is very pleasing and recognition of his talents.

The team at Lindsay Park won the Fred Hoysted Medal, while John Allen won the Tommy Corrigan Medal for the jump's riders.

Below is a list of the award winners and when you go through them, ATB have an affiliation with most.

Victorian Racehorse of the Year - Winx

Let's hope the trend continues during the current season.

To race a horse with Australian Thoroughbred Bloodstock check out our racehorse shares for sale page.