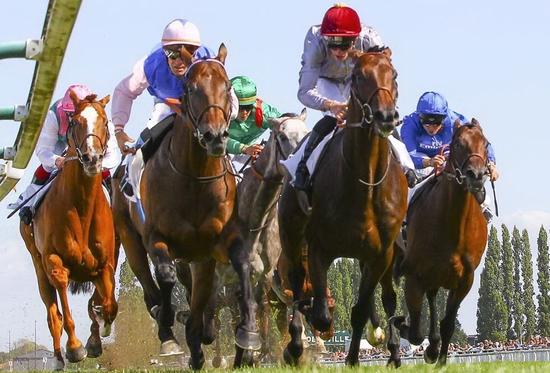 Tiberian's trek to this year's Melbourne Cup continues to gain momentum after a narrow but tough victory in the Group 2 Grand Prix de Deauville (2500m) at Deauville (France) last weekend.

After settling midfield during the run, regular rider Olivier Peslier peeled the 5YO around the pacemakers to hit the lead and then stall off runner-up Doha Dream.

The French import trained by Alain Couetil has now won four of his five starts since Darren & Liz Dance's Australian Thorougbred Bloodstock acquired 50% ownership in the stallion earlier this year.

After the disappointment of losing 2016 Cup runner-up Heartbreak City in a freak training mishap, the leading syndicators are locked and loaded for another assault on the race that stops a nation.

Fully qualified for the Cup, plans are not to run again before the race on the first Tuesday in November.

He will arrive in Australia on September 30th, with his training base being at the Werribee quarantine centre.

Australian Thoroughbred Bloodstock have had outstanding success without winning the Cup.

For racehorse shares in an International galloper with the Melbourne Cup the ultimate target contact Darren Dance on 0417 616666 or via email darren@atbloodstock.com.au.