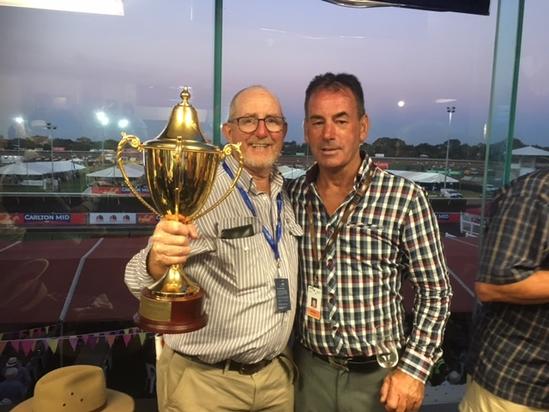 The 2017 Carlton Mid Darwin Cup winner Royal Request may not have been wearing the traditional fluro yellow colours of Australian Thoroughbred Bloodstock, but among the ownership were plenty of excited ATB clients, including the companies owners, Darren & Liz Dance.

Trained by Neil Dyer, a regular and successful visitor to the Territory over the years, ownership was put together outside the sphere of ATB syndication's.

Darren & Liz have also been regular visitors over the years, but yesterday was their first success.

Horses including Syreon and Proverb have carried their hopes in years previous.

Royal Request who has been winning at Darwin since he was a 3YO, ran fourth for this group of owners last year before triumphing in brilliant style yesterday.

In fact the win was his ninth in Darwin and third on the trot this preparation, for a nice combined collect of over $210,000.

A superb ride by Jarrod Todd landed the gelding a three length winner over Saturday Sorcerer trained by Jason Manning.

Adding to the excitement of the day was Arctic Song winning for a similar group of owners.

Also trained by Dyer, the 7YO formerly trained by David Hayes spreadeagled the field to win by nine lengths.