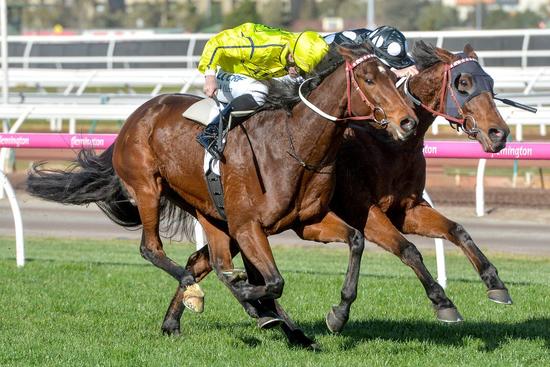 Australian Thoroughbred Bloodstock racehorses have delivered some fantastic results during the first week of the 2017/18 racing season.

Darren & Liz Dance's syndication business closed out the previous season in fine style with thirteen winners during June and July, bringing the overall tally to 49.

The first winner of the current season was Mai Shiny Choice at Pakenham last Thursday for trainer Robbie Griffiths.

It rectified a poor start to the season when strongly fancied Darren Weir runners Dash Of Maple and Silver Stratum failed at Warrnambool two days earlier, albeit Silver Stratum running bravely for fourth. He will go close next start over 2000m.

Mai Shiny Choice was beautifully ridden by Brad Rawiller, the full brother to our ill-fated sprinter Uxorious rewarding his patient owners with a strong win at his third run back from a injury-enforced lay-off.

The Friday seen the unlucky Equietto run bravely from his outside barrier to be beaten less than a length at Warracknabeal. His winning turn is also just around the corner.

The weekend rolled around with some good chances at various venues, but all eyes were on Flemington.

While not winning, promising 3YO filly, Chateau Griffo lived up to her promise with a fast-closing third over 1000m down the straight.

She will now head to Cranbourne to hopefully break her Maiden status en route to the Thousand Guineas at Caulfield.

As the name suggests she is also trained by Robbie Griffiths.

It also left ATB's Darren Dance almost as breathless as the jockey after the race.

"I'm exhausted, I didn't think he was going to get there!" he told Racing.com's Jason Richardson.

The 5YO son of Raise The Flag has it all ahead of him, whether it's this Spring or next.

Moe was also the venue for Pressing Matters to run another bold third in a 2408m Maiden with Jack Hill riding - his winning day is near.

Roll on Sunday and a wet bleak looking Ladbrokes Park Sandown was the scene for another chapter in a remarkable comeback by Galileo's Pearl.

Backing up nine days after winning on the synthetic at Geelong, the Mick Kent trained son of Galileo chalked up his third win on the trot.

With regular rider Michael Walker on board the pair dug deep to win on the heavy surface.

Walker revealed a trick that helped the 6YO surge late.

""He is a funny horse, when you hit him with the right hand he does enough but if you then switch to the left he finds another gear, he did it last time so I had it mind again for today."

After a few hours sleep on Sunday evening, the loyalest of followers joined expectant owners to watch our Melbourne Cup hopeful Tiberian run at Deauville in France.

After a poor ride and result at his previous Group One start, the script was once again back in place with a strong all the way win when carrying topweight in the Group 3 staying event over 2500m.

Jockey, Olivier Peslier was forgiven and the Melbourne Cup journey was back on course for the Alain Couetil trained stallion.

Some excellent days of racing made for a pleasant Monday morning; a spring was in the step of many ATB folk.

Social Media copped a hiding and for good reason; some great banter for some well deserved spoils.

Mainstream racing media also took hold and with that it rounded out a brilliant few days for Darren & Liz's popular syndication business.

If you are interested in racehorse shares, Australian Thoroughbred Bloodstock has plenty to offer you and your friends.