Shiny start to the new season for Robbie Griffiths 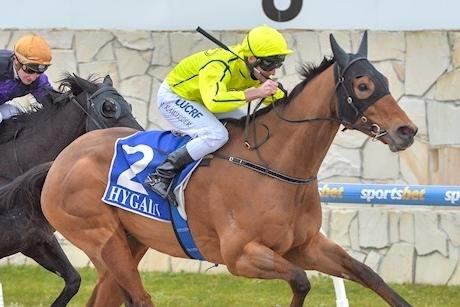 Thanks to Kristen Manning & the Robbie Griffith's stable for this story.

We began the day at Pakenham with our first winner for the new season - we ended the day with three! Big congratulations to everyone at the stable on a winning treble; Cherief's Choice, Weekend Escape and Mai Shiny Choice all gallant to the line!

One of the favourites in the BM58 1400m contest, Mai Shiny Choice looked a top chance on the back of two very encouraging runs back from a lengthy, injury enforced (tendon) break and so it transpired, the lightly raced five-year-old always travelling well for Brad Rawiller.

"It could not have worked out any better," Rawiller reported - "he was nice and sharp out of the gates and straight away come under me, travelling like he was going to be hard to beat."

"We probably got to the front a bit too soon but when I asked for that extra little bit he was just too good for them."

"He had run super at his last couple of starts," Jade Matthews said, "and up over a little bit further today it looked the perfect race for him."

"He was a little bit wayward when he hit the front but Brad did a good job keeping him straight to the line."

The best is still to come for Mai Shiny Choice with Matthews noting that "we have always had the opinion that he is a miler who may even get over a bit further and we think he can definitely step up again from today."

A home-bred for Australian Thoroughbred Bloodstock and raced by a big group of their happy owners, Mai Shiny Choice by Choisir is a full brother to the Gr.3 winner Uxorious and a half-brother to the stakes placed multiple city winner Shiny Buttons.

Whilst we don't expect Mai Shiny Choice to reach the heights scaled by the mighty Black Caviar he does have something in common with her - the same fourth dam!