Two In A Row For Pearl 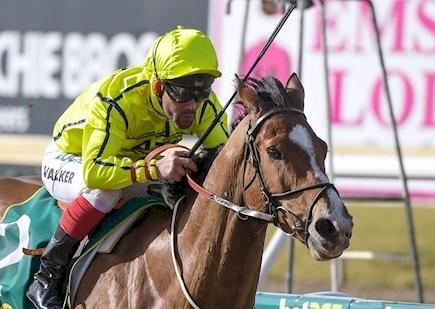 It was a big group of happy owners who welcomed Galileo's Pearl back to scale at Geelong on Friday, the in-form five-year-old raced by an Australian Thoroughbred Bloodstock Syndicate with the company's Peter Morganti on hand to co-ordinate the celebrations!

"That was really good," he enthused.

"He was out for twelve months with a tendon injury and has come back to win a race on a heavy track and then come here onto the synthetic and win again, he has done a great job."

Galileo's Pearl's injury, may have been, Morganti said "a blessing."

"The breed do take a while and it gave him that time in the paddock to mature."

Always travelling well along the rails for Michael Walker, Galileo's Pearl - who was favourite on the back of his dominant Moe victory two weeks prior - gained a split early in the straight and away he went.

And whilst the winning margin was an impressive two lengths, Walker reported that it could've been all the bigger if not for the horse - who is still lightly raced with just twelve starts under his belt - still doing a bit wrong.

"He is a hard horse to ride, he gets his head up if you pull back on him and when I put the stick away in the straight he really slowed down. But he did it that easily, I think he can step up in grade off that."

It was win number three for Galileo's Pearl and Walker has been aboard for all of them... "I seem to have a knack with him!"

Both Walker and Morganti were keen to praise the stable at their efforts at getting Galileo's Pearl back from a strained tendon injury.

"The stable is renowned with their work with these sort of horses," Morganti said with Walker adding that "Mick and his team are doing a tremendous job with the horse, everyone knows they are really good at getting horses back from injury."

With Galileo's Pearl heading to Sandown in a couple of week's time, the best may still be to come for the gelding who is bred to relish even longer trips than the 1600m and 1900m of his last two victories - "I think the further he gets over the better he will get," Morganti said.

Bred on a 2 X 3 cross of Northern Dancer's breed shaping son Sadler's Wells and bred on the same Galileo/Danehill cross as the mighty Frankel, Galileo's Pearl is out of a 3/4 sister to the Newmarket Gr.2 winner Infamous Angel.