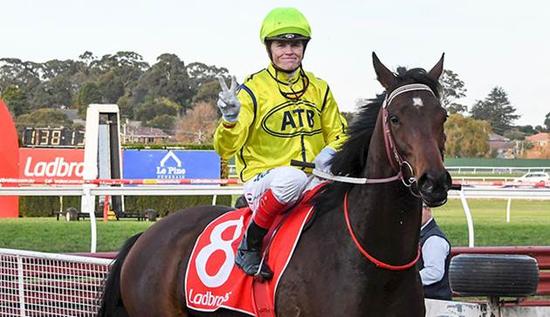 When Yogi stormed down the middle of Ladbrokes Park Hillside for victory in the Le Pine Funerals Handicap over 1600m today, it capped a great recent run for Australian Thoroughbred Bloodstock and its big team of owners.

The former Kiwi gelding provided ATB with it's fourth win in five days.

In doing so the season total soared to 41 at the good strike rate of 13%.

Yogi's win was very impressive in the end, but it did take every little bit of Craig William's guile and energy to get the 4YO home. A progressive stayer he was only second-up today and with continued improvement looks to have the scope to compete in much better races.

The third win of his short career it also took trainer Darren Weir to 399 wins for the season and one away from the first Australian trainer to break the 400 barrier.

While Yogi's career is in its infancy, ATB welcomed the return to form of two veteran's during its recent great run.

Honest stayer Falago delayed retirement with a strong win over 2500m at Flemington last Saturday, while 9YO Seismos who finished ninth in the 2014 Melbourne Cup behind Protectionist won at 3200m in France last night.

Falago has taken a few runs to hit his straps this preparation, but appreciated getting back to the big Flemington track, and courtesy of a great Ben Thompson ride he won his fifth race for trainer Darren Weir. His other win was with Chris Waller before changing stables.

Seismos dropped back from stakes level to win his first race since August 2014. Trainer Henk Grewe has done a great job getting him back in winning form and hopefully he can win again in a fortnight.

The fourth leg of ATB's success was also with a Weir trained runner, in 4YO mare Dash Of Maple.

Having her first run since being offered to ATB clients as a tried racehorse she saluted at Hamilton on Sunday in a 1200m Maiden on a heavy track.

During her first preparation she showed a liking for wet tracks with two heavy track placings from four outings.

Michael Dee rode her to victory and placed similarly on rain-affected tracks hopefully she can find the winning post again for her big group of excited owners.

With shares sold in recent winners Wanted Diva, Equietto, Himeji Jo and now Dash Of Maple it shows that ATB can offer up good value with its tried or near ready to race gallopers.

Click here for more info on our racehorse shares for sale.